Government is facing a High Court challenge that goes to the heart of a surge in mining and prospecting applications along several hundred kilometres of the West Coast and offshore.

The legal challenge is to specific decisions taken by the government: its approval of a massive expansion of the current Tormin mineral sands beach mining operation near Lutzville, and its dismissal of appeals against this decision.

However, environmentalists are hoping that a favourable judgment might also force the government to implement a comprehensive strategic assessment of the cumulative impacts of mining in this region, both on land and offshore, before approving more mines.

Much of the land area affected by mining has already been proclaimed as Critical Biodiversity Areas (CBAs) under South Africa’s international obligations to the Convention on Biodiversity that it signed in January 1996.

Both the Department of Environment, Forestry & Fisheries and the SA National Biodiversity Institute (SANBI) are currently in the process of identifying additional CBAs and EBSAs (Ecologically or Biologically Significant Marine Areas) as part of their efforts to protect biodiversity and fulfil South Africa’s commitments to the Convention.

Many new West Coast mining projects have either already been approved or are currently in the approval process or are being planned that one despondent commentator remarked: “It seems like the Wild West is upon us”.

The current court challenge – brought in the Western Cape High Court by non-profit environmental justice advocacy group, the Centre for Environmental Rights (the Centre) and supported by expert witnesses – challenges the decision by the Department of Mineral Resources and Energy (DMRE) to grant environmental authorisation to Australian mining company Mineral Sands Resources to massively expand its current 120-hectare Tormin beach mining operation near Lutzville, without having to apply for a new mining right or undertake a full environmental impact assessment for the expanded area.

In late September, the Centre launched its three-part High Court review and rescind application against the current Minister of Environment Barbara Creecy, and Minister of Mineral Resources Gwede Mantashe and his department’s Western Cape regional office.

The Centre is seeking to:

In a separate legal procedure, the Centre has also lodged an internal (departmental) administrative appeal with the DMRE against its approval of Tormin’s expansion, coupled with an application to suspend implementation of any mining in the expanded area by Tormin pending the outcome of the Centre’s internal appeal.

In her founding affidavit in the review application, Centre attorney Zahra Omar stated that there had been “a complete lack of transparency” in the process by which Tormin’s existing mining right had been amended to include the expanded area.

It “potentially undermines the One Environmental System, and is unlawful,” she argued.

“The fact that the area into which the mine is to be expanded falls largely within a CBA [Critical Biodiversity Area] is extremely significant. There are fundamental flaws in respect of which the impact of the proposed mining on the CBA have been assessed and decisions made in respect thereof. The precautionary principle has not been properly applied as required. Climate change and cumulative impacts have not been taken into account.”

In a supporting affidavit, Merle Sowman, Associate Professor and Head of the Department of Environmental and Geographical Science at UCT, stated that an estimated 63km coastline and estuary frontage would potentially be impacted by mining activities if all MSR’s applications were approved. “The total area of the properties that could potentially be impacted directly or indirectly by mining if all applications are approved would be in the order of 11,500 hectares.”

“It is imperative that a SEA (strategic environmental assessment) of the cumulative impacts of expanding the mining footprint along this entire coastal area be undertaken. Only then would a decision-maker be in a position to fully assess the net effect of the various activities and impacts and the mitigation required to ensure that developments do not exceed acceptable environmental limits.”

A second supporting affidavit was filed by environmental consultant and assessment practitioner Susie Brownlie. “The negative impacts on biodiversity of other existing or ‘applied for’ mining operations that affect the same biodiversity, have not been assessed. There is a range of different types of mining activities in the coastal region and offshore (e.g. diamond mining), which all affect terrestrial, coastal and marine biodiversity,” stated Brownlie.

She pointed out that an assessment of cumulative impacts was required in terms of EIA regulations promulgated under the National Environmental Management Act.

“It is widely recognised that EIA is not an appropriate tool to assess cumulative impacts … For this reason, Strategic Environmental Assessments have been carried out for specific regions (e.g. Coega or Eastern Cape Industrial Development Zones) or sectors (e.g. renewable energy development) in South Africa to ensure optimum and sustainable use of land and resources.

“An SEA should be commissioned in this coastal region, given the numerous mining applications and activities, in order to determine acceptable and ‘no go’ areas for mining and associated activities, and plan effective and coordinated mitigation.”

DEFF spokesman Albi Modise confirmed to GroundUp that Minister Creecy would be opposing the CER’s application and that her answering affidavit would be filed by the State Attorney “as soon as possible”.

The DMRE said it was currently liaising with the State Attorney and was in the process of filing the record and reasons for its Tormin decision. “The Department will consider on its further participation in the litigation upon having taken legal advice.”

Mineral Sands Resources had not replied at the time of publication. 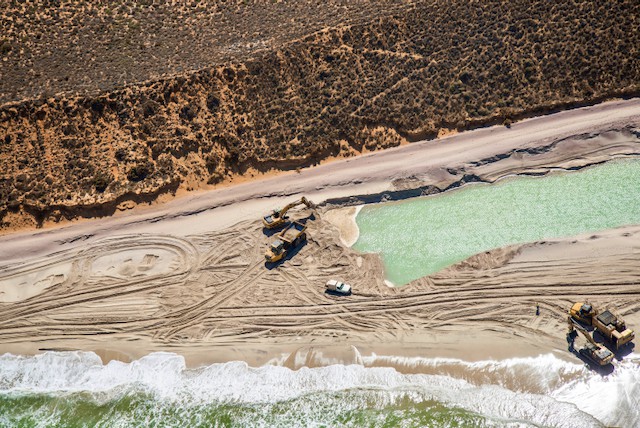 Published originally on GroundUp .© 2020 GroundUp. This article is licensed under a Creative Commons Attribution-NoDerivatives 4.0 International License.  Banner image: Much of the West Coast between Elands Bay in the south and Alexander Bay in the north is, or has already been, the target of mining operations. Photos: John Yeld
Mining
Environment

Environment
Raw sewage is flowing directly into the Zion Dam in Extension 6, Makhanda, from two manholes located 100 metres from the dam. Residents say the constant stench...

Environment
The Green Scorpions have ordered the City of Cape Town to sort out pollution in the Milnerton Lagoon, following continued failures at the Potsdam Waste Water ...