“Shack” is a glorified name for a dog kennel, says councillor

Residents of Cyril Ramaphosa informal settlement in Port Elizabeth, some carrying the empty paint buckets which they use as toilets, blocked roads with burning tyres, rocks and trees early on Wednesday morning. They were demanding more toilets and the electrification of their shacks.

Public Order Police were called to disperse the residents, who closed Bethelsdorp Road as early as 6:00am. But Mayco member for Economic Development, Tourism and Agriculture, Marlon Daniels, arrived and ordered the police to let the residents voice their frustrations until municipal officials came to address them. Daniels, who had been on his way to attend a special council budget at 10:00 am, phoned Acting City Manager Mandla George and told him to send Water and Sanitation director Barry Martin to address the protesters.

The residents blamed the Nelson Mandela Bay Municipality officials for making promises which were never kept.

The settlement was started in February 2018 by backyard dwellers from various northern areas. About 320 households share five stand pipes — four of which are broken — two Jojo tanks, and six chemical toilets. Some relieve themselves in buckets, pit toilets and nearby bushes. They use firewood for cooking, and candles for lighting.

On the telephone to George, Daniels could not hide his anger in front of the protesters. “I won’t leave until Barry Martin arrives here and makes sure the water is running. We are faced with Covid-19 and there is no way you can live without water.”

“Yesterday, I had to intervene for toilets that have been uncleaned and overflowing for too long.”

Daniels criticised the municipal officials who were “failing to do their job”.

“We make political decisions and their duty is to implement those decisions. I live here in the northern areas and I have relatives who live in this informal settlement. ‘Shack’ is a glorified name for a dog kennel.”

Community leader David Davidson said Human Settlements mayco member Andile Mfunda had promised additional chemical toilets and standpipes in October last year. “Residents prefer to use pit toilets and bushes to relieve themselves. But that is not healthy because the whole area stinks and children have no place to play.” 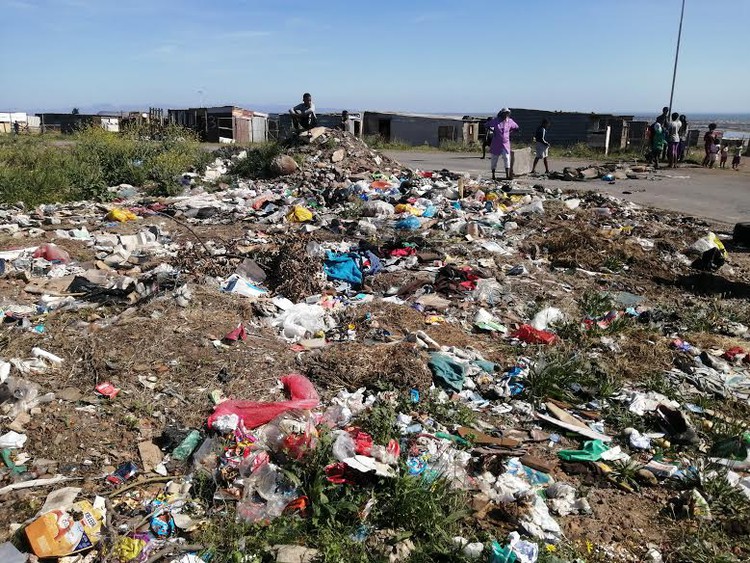 Residents empty the buckets they use as toilets on the rubbish dump in front of their shacks. Photo: Mkhuseli Sizani

“We also wrote to the Department of Infrastructure and Engineering and asked for electricity because our place is too dark,” said Davidson. “People use firewood for cooking, and candles. In the past three months five shacks were burnt down due to these candles.”

“Last month we had a meeting with Roads and Transport mayco member Rosie Daaminds. She promised to report all our problems to Barry Martin. But nothing has happened. Residents are angry. They want electricity and toilets,” he said.

Antoinette Brower said,”We are a family of four and we use empty 25 litre paint buckets to relieve ourselves like other households. We can’t use the chemical toilets because they are filthy and cause infections. The toilets are overflowing and are cleaned after two or three weeks.”

“We throw our poo and pee in the pile of rubbish in front of our shacks.”

Martin arrived with a team and checked the stand pipes and Jojo tanks. “Our plumbers are busy fixing the four broken standpipes. Vandalism is the problem we have in all the informal settlements,” he said.

Daniels told the residents that Martin couldn’t answer all their questions. But he promised to take up their grievances with relevant officials and the acting executive mayor.

“Please stop the protest and allow Martin and his team to do his job. I will report your problems to the relevant officials and the acting mayor. It is they who will be able to tell you, after we meet, when you will get your electricity,” he said.